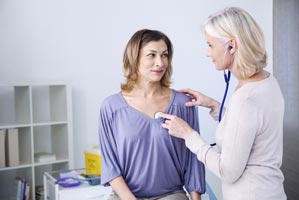 
Course and quiz certificates are available for enrolled users.

Learn cardiac auscultation. These courses cover abnormal heart sounds including heart murmurs, third (S3) and fourth (S4) heart sounds and congenital conditions. Learn these sounds by selecting a topic from the table of contents below.

We offer many graded quizzes, ranging from fundamentals to advanced topic. Quiz scores are saved to your personal dashboard.

Our auscultation reference guide includes over one hundred heart sounds, both real and simulated. Our lessons include text, heart/lung sounds, text description, heart sound location indicate, a waveform and cardiac animation. Use these buttons to view sounds by heart sounds location.

Heart murmurs are sounds produced by turbulent blood flow, particularly from the heart's valves. They can be found in infants or develop later in life. Innocent murmurs frequently resolve without treatment. However, other abnormal heart murmurs indicate a cardiac condition.

Stethoscopes are used to listen to heart murmurs. A normal heartbeat sounds like "lub-DUB", which are the sounds of your heart valves closing. This "lub-DUB" sound changes, often with additional sounds being heard.

On this website, we provide lessons, reference guides and quizzes for cardiac auscultation of murmurs and other heart sounds. This includes gaining an understanding of cardiac rate and rhythm, conditions of the valves and possible anatomical abnormalities such as congenital defects. Links to our lessons, guides and quizzes are found in the 'Quick Links' box to the left.

Where To Auscultate Heart Sounds

Heart sounds auscultation is performed over five locations on the anterior chest wall. Use the stethoscope's diaphragm, switching to the bell to hear lower pitched sounds.

The recommended heart murmur location on the chest wall is indicated by an icon and text within each of our lessons. Using these auscultation positions can help in evaluating the heart sound or murmur's source. 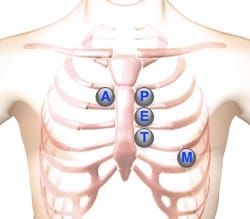 Heart murmur duration refers to the portion of systole or diastole that the murmur occupies. Terms used include short and long. Murmurs lasting throughout systole are referred to as holosystolic or pansystolic.

Listen for additional aspects of the murmur's sounds. Heart murmurs may have qualities that can be noted as musical, harsh, blowing, booming, sharp or dull.

Within each lesson, the author provides a sketch of the patient's position during auscultation, such as supine, left lateral decubitus, squatting or sitting.