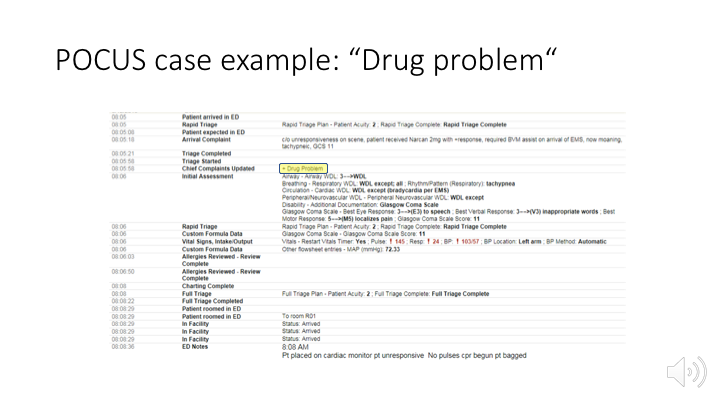 So I think probably the best place to really show what POCUS is and what it can do is to give you a case - and this is an actual case I had a little more than a year ago. I was working in our emergency department and a young woman came in, in her 30s. She was put in our resuscitation bay unresponsive and billed as a “drug problem”. It wasn’t a bad guess – she was the demographic and she was unresponsive. However, she received 2mg of intravenous naloxone or narcan without response. When we got in there she was still unresponsive – she was very tachycardic, her heart rate was up and her blood pressure was low and she wouldn’t wake up at all. So we did the normal stuff – put an IV in, gave her some fluids, gave her ACLS drugs, and prepared to intubate. And actually the resident went ahead with the intubation and I took a look with the ultrasound, because that's what I do.